After his PhD at Cambridge, he has worked on particle physics experiments at DESY (TASSO, and the discovery of the gluon, and subsequently JADE, and the measurement of the B lifetime) , CERN (OPAL doing precision studies of the Z ), and SLAC(BaBar, and the discovery of CP violation in B mesons). He is currently a member of the LHCb collaboration. After many years at Manchester, rising from lecturer to professor, he moved to Huddersfield in 2011, from where he retired in 2017 He has written a textbook on Statistics, founded the Cockcroft Institute, started the ThorEA association, and originated the National Particle Physics Masterclasses. He was the PI of the CONFORM project that led to the successful operation of EMMA, the worlds's first nsFFAG accelerator.

You can find many ways in the textbooks to derive the Lorentz Transformation, starting from Einstein’s famous two postulates: that the laws of physics are the same in all inertial frames, and that the speed of light is a constant. You can do it in one big chunk, or by starting with length contraction and time dilation.

What I want to do here is show a proof which requires only one, surprisingly minimal, assumption, and  which relegates ‘light’ to its proper place as a subsidiary phenomenon. This is the opposite of the order which is usually taught, so this is not the sort of proof  you get in Relativity101, but after you’ve learnt and are happy with the standard proofs, I think you’ll appreciate this one.

We make some basic assumptions – as indeed we do in a conventional proof, though they’re not usually spelt out.  Events occur in continuous time t and continuous space r, though for simplicity we’ll just consider one space dimension x. Space and time are isotropic and homogeneous – there are no special times or places. We can plot events in space-time diagrams, where the t axis is calibrated using repeated identical processes like the swing of a pendulum or the vibrations of a crystal, and the x axis is calibrated using stationary identical rods.

Events cause, and are caused by, other events. For a pair of events A and B it could be that A→B, A has a (possible) effect on B, or that B→A, B has a (possible) effect on A. In the first case we say that A lies in the past of B, and B is in the future of A. In the second case it’s the other way round. We dismiss the possibility that both A→B and B→A, as that leads to paradoxes of the killing-your-grandfather variety. But what about the possibility that neither A→B nor B→A: that there can be pairs of events for which neither can influence the other?

There’s not an obvious answer. If you were designing a universe you could insist that any pair of events must have a causal connection one way or the other, or you could allow the equivalent of the ‘Don’t know’ box. The choice is not forced on us by logic. But let’s suppose that we do live in a universe where this directed link between events is optional rather than compulsory:

There are pairs of events which are not causally connected.

I promised you a single assumption: there it is.  Now let’s build on it. 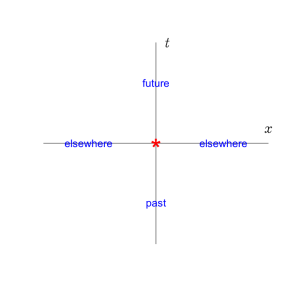 For any event there must be some events which are not causally connected. The assumption says this is for true for some events, but all events must be similar (as space and time are homogeneous) , so this is true in general.  So we can drawa  space-time diagram showing the events  that are  past, future, and elsewhere for an event at the origin.

Causality is transitive: if A→B and B→ C then A→ C, as A can influence C through B. That means that  at any particular point x, events that are in A‘ s past must be followed by elsewhere events and then future events. They can’t be mixed up.  The events occur in defined regions

Even at small distances there must be elsewhere events – if there were some minimum distance from A, Δ, within which all events were either past or future,  and B is the event at Δ on the division between past and future, then all events within 2Δ of A must be in the past and future, and so on for 3,4,5….

So to re-cap: first we establish that there are elsewhere events, then that they lie in regions, then that these regions go all the way to the origin, and finally that the shape of the elsewhere region is a simple double wedge. (It’s called a ‘light cone’ as you can imagine extending the picture to two space dimensions by rotating these 2D pictures about the vertical axis, but you probably knew that already.)

Out of this picture a number emerges: the gradient of the line dividing the elsewhere region from the future (or the past). We have no way of knowing what its value is – only that it is finite. It describes the speed of the fastest possible causal signal and we will, of course, denote it by c. It can be viewed as a fundamental property of the universe, or as a way of relating time measurement units to space ones.

Now we’re on more familiar ground. If an event that we denote by (x,t) is observed by someone in a different inertial frame moving at some constant speed relative to the first, they will ascribe different numbers (x’,t’). What is the transformation (x,t)→(x’,t’)?

Inspecting these shows that v, which we introduced as a parameter, describes the motion of the point x’=0, the origin of the primed frame, in the original frame, i.e. the speed of one frame with respect to the other.

A bit of algebra shows that the ‘interval’ of an event is the same: x2-c2t2=x’2-c2t’2. Which is neat, showing that the points lie on a hyperbola of which the light-cone crossed-lines is the limiting case, so they cannot move between sectors . But we didn’t have to assume that the interval is unchanged, only that an interval of zero remains zero.

So the Lorentz Transformation springs from the basic causal structure of space-time, assuming that not all events are causally connected one way or the other, with c the speed of the fastest causal signal, whatever that happens to be. Length contraction and time dilation follow from this. Then you discover that if you have Coulomb’s Law type electrostatics the Lorentz Transformations give you magnetism and Maxwell’s Equations emerge. These have wavelike solutions with wave velocity  c.

In terms of logical argument, the causal structure of the universe just happens to include the possibility that 2 events cannot affect one another in either way. This fundamental property leads to relativity and the Lorentz Transformation,  which leads to electromagnetism, which then leads to EM waves and light, even though historically and pedagogically the sequence is presented the other way round.

After his PhD at Cambridge, he has worked on particle physics experiments at DESY (TASSO, and the discovery of the gluon, and subsequently JADE, and the measurement of the B lifetime) , CERN (OPAL doing precision studies of the Z ), and SLAC(BaBar, and the discovery of CP violation in B mesons). He is currently a member of the LHCb collaboration. After many years at Manchester, rising from lecturer to professor, he moved to Huddersfield in 2011, from where he retired in 2017 He has written a textbook on Statistics, founded the Cockcroft Institute, started the ThorEA association, and originated the National Particle Physics Masterclasses. He was the PI of the CONFORM project that led to the successful operation of EMMA, the worlds's first nsFFAG accelerator. View all posts by rogerjbarlow

4 thoughts on “The Lorentz Transformation – a minimal proof”

This site uses Akismet to reduce spam. Learn how your comment data is processed.